Non-VOC Member
As well as the standard timed breather, my Rapide has a 'D' breather coming from the front inlet rocker cap. Having read all I can about breathers, I understand that it is not a good idea to have the two in operation at once. My question is this, would it make the breathing more effective to install a PCV valve in the 'D' breather and leave it on, or remove it and rely on the original timed breather?
Thanks.
T

The general theory is that when looking at a single cylinder it is essentially and air compressor. Normally, we think of the engine as comressing the air in the combustion chamber at top dead center when the exhaust valve is closed. But, if you think about the underside of the piston, when it travels back down to bottom dead center, it is compressing the air inside the crank case because the volume inside the crankase is getting smaller. With the D breather, which is simply open to the atmosphere, air is pushed out as the piston descends and is pulled in when it ascends. Thus, it lets air in and out of the crank case so that with every revolution, the crank case experiences an amount of vacuum and an amount of pressure. If you put a check valve or PCV valve on, the idea is that the valve does not allow air back in so the crancase pressure should be lower through most of the cycle. The timed breather does the same thing by opening a slot when the air is going out and closing the slot when the piston would normally want to draw air into the crank case. You can now understand that having an atmospheric breather on the bike at the same time as you have a timed breather is not productive. When the timed breather closes as the piston goes up, instead of drawing a little bit of a vacuum, the outside air simply comes in through the D breather. It is best as Timetraveller says to go with one or the other, not both. You can put a check valve in the D breather line in the hopes of holding some of the low pressure in the case.

I have used the timed breather routinely to 7000 rpm with good results, but I have also used a hose with a Ducati pcv valve with the same results. I cannot remember if the D breather needed the modified top guide to work properly, but I hope someone who does know will jump in.

Click Vincent - Engine here and scan down to Crankcase Breather. An elegant and inexpensive solution, it and any PCV is far more effective (accurate when you're using the controlled bleed-back variety) when you have no other unrestricted ports like a D breather running open. Remember, with open breathers, what gases they permit to exit on the pistons dropping to BDC a portion of which are drawn back in on the rise to TDC and must be dealt with again...and with every rise to TDC thereafter. 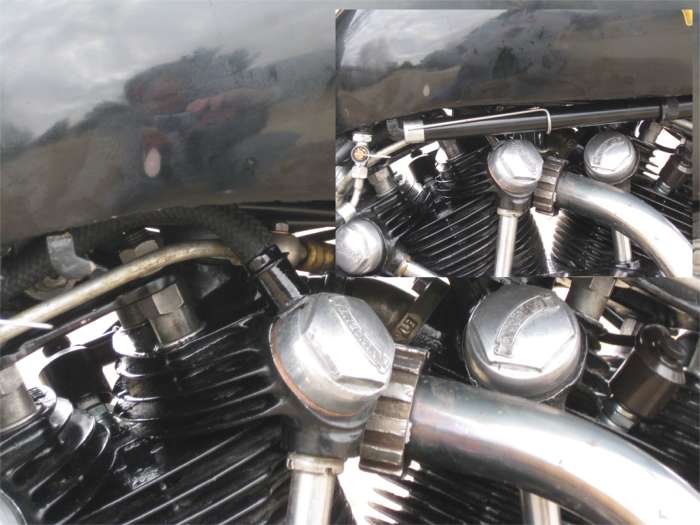 VOC Member
VOC Forum Website Moderator
How is the top guide modified to use a "D" type breather?

BigEd said:
How is the top guide modified to use a "D" type breather?
Click to expand...


It's not the Top Guide that's modified, it's the D Cylinder Head. There's a larger opening alongside the Upper Guide seating to allow more air to pass which is why putting a D Breather Cap on a B or C Cylinder Head is rather pointless since there is only a small crescent- shaped opening for air to escape.
Last edited: 5 May 2011
B

VOC Member
VOC Forum Website Moderator
Dear Len,
Thanks for that. I have the heads off at the moment and thought that I could do any internal mods while they are off for possible future use.


Len Matthews said:
It's not the Top Guide that's modified, it's D the Cylinder Head. There's a larger opening alongside the Upper Guide seating to allow more air to pass which is why putting a D Breather Cap on a B or C Cylinder Head is rather pointless since there is only a small crescent- shaped opening for air to escape.
Click to expand...

VOC Member
If you need to clarify Len's point look down inside the top guide opening in a cylinder head and look at the semi circular ended slot which goes out toward the rocker tunnel. This needs to be extended back towards the rocker.

VOC Member
Thank you Len for the clarification. I could not remember what was modified on the D's, but I remembered that something was different that would cause the D breather to be less efficient on a C.