VOC Member
Hi There,
I wonder if any of you magneto buffs can help me, I'm building a 50 degree manual adv/ret magdyno from scrounged parts and have a couple of things I could use help with.

First. Do I set one cylinder just as the armature poles come from under the magnets and do I set the 2nd cylinder early or late.

Second. Is this the advanced or retarded position.

VOC Member
Magnetoman,
I understand all the figures you've given me , as I said initially I just trying to cobble together a V twin magdyno for another application and wish to understand a couple of things better.

At present I have two good sparks BUT if I move the cam slightly in one direction one spark fades out, and if I move the cam ring slightly in the other direction the brass segment in the slip ring no longer coincides with the pick up, this is because in a magdyno the pickups are 90 degrees out of position compared to a KVF (in relation to the magnets and armature) hence the need for special slip ring with an extended brass segment (I have an article in a Brough technical publication explaining how to convert single cylinder ones to this) which I am doing.

What I'm trying find out as I asked initially is it better to have the second spark early or late, irrespective of which cylinder is which.

greg brillus said:
So on the test rig when spun up to say 1500 RPM at the mag shaft, the primary voltage measured with a peak voltage meter would read 200 volts, whereas if you rotate the end housing 180 degrees thus reversing the polarity and run up again on the test rig, you get about 120 volts. Is there any reason for how or why this is...
Click to expand...

The internals are completely symmetric so the magnitude of the voltage, pos. or neg., is as well. I've spent a lot of time spinning magnetos and measuring voltages, but always with oscilloscopes which I know are equally happy with pos. or neg. readings, and never found an asymmetry where I didn't expect one. If I understand correctly how you made the measurements, I would suspect your peak voltage meter is giving an incorrect reading for one polarity. Is yours a commercial meter, or one you built yourself?
Upvote 0 Downvote

chrislaun said:
What I'm trying find out as I asked initially is it better to have the second spark early or late, irrespective of which cylinder is which.
Click to expand...

I have a thick notebook of magneto measurements I've made, but the offset of a V-twin magneto makes it easy to get mixed up. However, think about it the following way:

Irrespective of anything else, we know that one cylinder will get full output because the points open just as the magnetic flux lines have been compressed the most and and are in the process of flipping direction through the armature, resulting in the maximum time rate of change of flux (Voltage = -d(flux)/d(time)).

The other cylinder will receive a smaller output because timing for it has to be set too early, when the flux lines are still being compressed, or too late, when whatever flux is left over is still flipping direction through the armature. Clearly, the situation isn't symmetric so it makes a difference if the second cylinder is timed for the wrong one of these, i.e. too late or too early. So, which is best for the second cylinder? Rather than dig through my old data I can give you the answer. It's not because my memory of the data is so good, it's because I remember finding that Lucas did it correctly. The '1' and '2' stamped on the KEV magneto housing, coupled with the timing imposed on the spark by the cam, ensure that #2 gets the largest voltage possible.

But, to directly answer your question, #1 sparks, then more than 180-deg. movement of the armature later #2 sparks. That means the second spark comes "late." After that it is less than 180-deg. before #1 sparks again, but since #1 is set at the optimum point the flux concentration is maximum and in the process of flipping so the less than 180-deg. motion doesn't affect the output of #1. Again, since it's easy to get mixed up with 'early' and 'late' the easiest thing to do is simply copy the timing Lucas built into the KVF.

The Bosch ZEV design from before WWI has asymmetric armature and internal pole faces that are offset by 45-deg (engine) to give the same, maximum output to both cylinders on a V-twin. However, by sometime in the 1920s engineers had figured out that this more complicated structure wasn't needed in order to get a large enough spark to the weak cylinder so designs became symmetric.
Upvote 0 Downvote
C

VOC Member
Thanks for that, I understand exactly, and fortunately I have spare fixed and manual adv/ret KVFs if needed for reference.

VOC Member
There is one thing about the behaviour of the V twin magnetos that is not quite symmetrical. It is the reason that one spark has to be after the maximum magnetic flux and not before. Even after the maximum magnetic flux has occurred the current in the coil tries to stay constant, because that is what coils do. The coil current continues even though it is not pushed by the flux because it is propelled by the magnetic properties of the coil. That is the reason the spark on the front cylinder can be reasonably strong even though the magneto is 25 degrees (magneto armature degrees) past the point of maximum magnetic flux. A spark timed 25 degrees before would be a lot weaker than the one 25 degrees after. But apparently some mags on 45 degree V twins are timed with one spark before and one after, but those would only be 11 1/4 degrees before and after maximum magnetic flux. Probably there would be a point that would be even better to get even sparks but that might vary with engine speed (maybe 5 degrees before and 16 1/4 degrees after)
This problem of timing the spark so it is synchronized with the maximum magnetic flux is also the reason why manual advance mags (the Lucas type ones) don't have as good a spark for starting as the auto advance type. The spark timing is altered by moving the cam ring which changes the timing of the spark relative to the armature poles. With the auto advance the points stay at the same relationship with the armature. Probably it is also the reason why some early V twins had twin mags.
Upvote 0 Downvote

VOC Member
Just an update, I think I set it up as suggested with one spark on max flux and the other later, it sparked both but was poor, since having it re-magnetized I've got two nice big blue sparks on both at advance and full retard.
Upvote 0 Downvote

Nigel Spaxman said:
Even after the maximum magnetic flux has occurred the current in the coil tries to stay constant, because that is what coils do. The coil current continues even though it is not pushed by the flux because it is propelled by the magnetic properties of the coil.
Click to expand...

If the flux ceased changing the current would decay in a time ~L/R, where L is the inductance of the coil and R is its resistance. If there were no arcing at all when the points opened the resistance of the primary would instantaneously increase to infinity from ~0.5 Ohms so the current would decay instantaneously. This in turn would create an infinite voltage across the coil (again, Lenz's Law). Thanks to arcing nothing reaches infinity in actual operation.

Anyway, two things take place simultaneously in our magnetos that create our sparks. Once is that the coil on the armature spins in the magnetic field of the permanent magnet, creating a current in the coil that, when interrupted by the points opening, decays extremely rapidly and induces a large voltage across the secondary. The other is the pole pieces in the magneto body along with the shape of the armature cause the flux through the armature to abruptly reverse direction at a certain, um, point. That represents a large d(flux)/dt, which induces a large voltage across the secondary. So, if the points are arranged to open at just the right moment the output of the magneto is the sum of these two processes.

Early Bosch magnetos (e.g. the ZEV) had asymmetric armatures to have the point of flux reversal maximum at two orientations ~45-deg. apart of engine rotation. Later it was realized this wasn't strictly necessary even though a symmetric armature supplies one cylinder with a weaker spark.
Upvote 0 Downvote 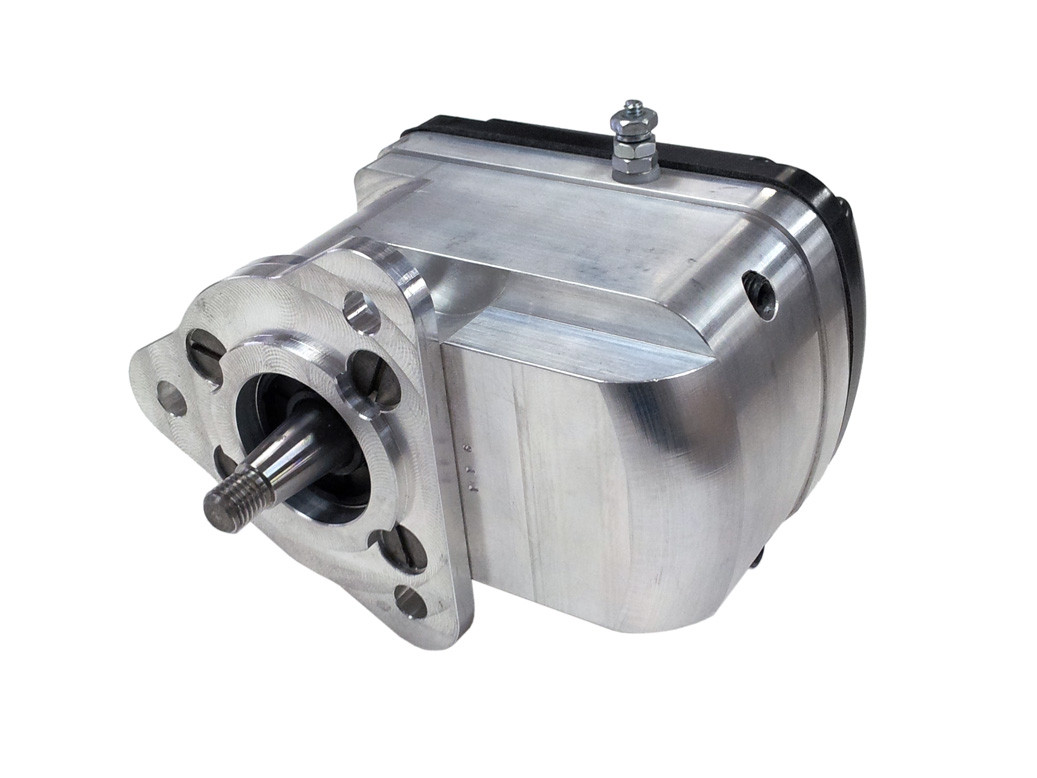