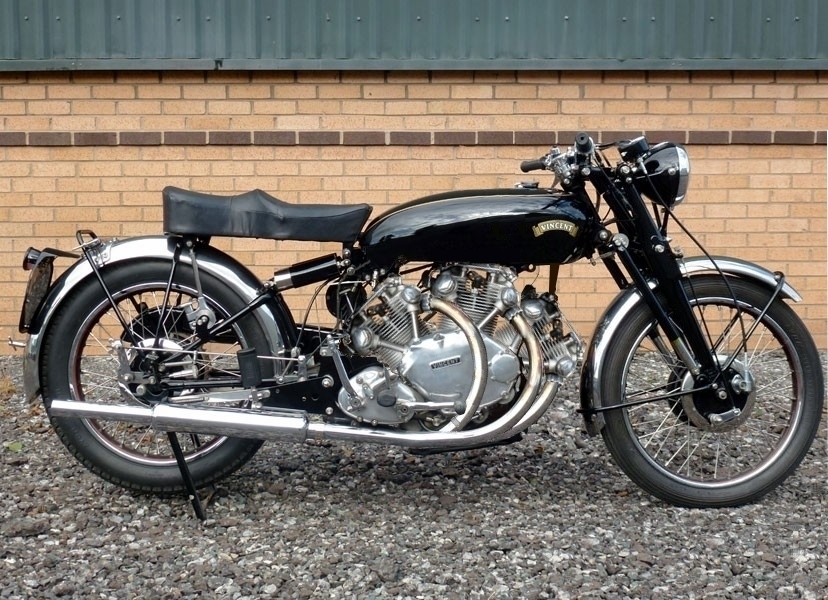 April is here and spring weather too. Many of us are keen to roll out the bike in the sunshine to try out any modifications concocted during the winter months. Someone who is extra eager to carry out the first road test is member Sune Lindberg.
During this last year he has spent an enormous amount of hours in his shop to create something no less fantastic than a three cylinder Vincent! It started with him having three Comet engines lying around and a complete frame as well.
He realised that he could not really use three Vincent bikes, so instead of selling anything, he started making plans to see if a 1500 cc Vincent could be created. When it comes to the figures, three times 28 bhp would mean 84 bhp in theory.


The only way really was to use a Comet block as a starting point since the angle between the cylinders needed to be altered anyway.
Instead of the Rapide 50 degree set up, the new design meant 42 degrees between rear and middle cylinders, and 44 degrees between middle and front cylinders.
A wider bearing journal for the connecting rods had to be created as well as an intermediate section between the crank cases.
A lot of welding and a lot of aluminium was needed to create spindle housings for the extra cylinders and camshafts. The location of the cylinders is such, that the centre cylinder is located to the right on the bearing journal, the rear cylinder has the centre position and the front cylinder the left position.
When the engine was done, the next problem was around the corner. The engine could not be housed in the original frame. The UFM and the fuel tank had to be lengthened in order to keep the front mudguard from obstructing the front cylinder. This operation was to prove not enough, there would still be a risk for contact if the Girdraulic fork was completely compressed. The solution spelled a short pipe installed inside the hydraulic damper to somewhat limit the damper travel. Better this, than to risk a locked front wheel due to hard braking or a sizeable bump in the road surface.
Since the engine had to be tilted somewhat backwards, the Vincentlogo on the timing case is no longer horisontal. But if this is a nuisance to anyone, Sune feels that, well, then this person can maybe do the job better himself.
The two front carburettors proved no greater problem, but the rearmost carburettor conflicted with the chain guard. The solution was to resort to an updraft carburettor situated between the engine plates behind the gearbox.

To find a magneto that could properly serve this configuration would prove as impossible as finding space for it. Instead a modified version of an electronic Pazon system takes care of this.

VOC Member
The Phils could not have done it better...

VOC Member
I see my cartoon version of this got into the new "Vincents since 1955" book, the caption on this in MPH was alluding to the fact that (Back in the days when Vincents were ridden hard enough for the VOC to hold High speed trials) the Comets were reputedly faster round Cadwell that the twins and the guy with the three was saying that the twins were faster etc etc ...

Very good you could get a job in any small volume motorcycle makers publicity department before they cut a single piece of metal....

This operation was to prove not enough, there would still be a risk for contact if the Girdraulic fork was completely compressed. The solution spelled a short pipe installed inside the hydraulic damper to somewhat limit the damper travel. Better this, than to risk a locked front wheel due to hard braking or a sizeable bump in the road surface.
.
Click to expand...

This explains why you've waited until April to unveil it. You wouldn't want to risk experimental handling in Winter!!

you will need one of these as well original matching numbers

VOC Member
God I want one.


Sent from my iPhone using Tapatalk

VOC Member
Max will have two engines.
Come on you special builders, after all someone has done it with harleys.

VOC Member
I like the idea of an inspection cover for the front camshaft & followers- Some of us could do with a couple of those on a standard bike.
Ray